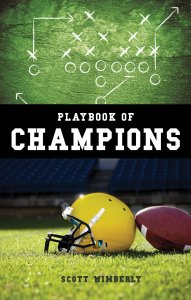 “You see, although your players were very talented, they were not talented in their decision-making skills.  They made poor decisions, and it cost you by them not having their minds right on the field. That is where my playbook will make the difference in your players.  It is not designed to help them run plays, but it is designed to help them make the right decisions in their lives, to get their mind and heart on the same page, going in the right direction, to have one heart beat, to be a champion.”

Coach Grimes knows he is in for another rough season. His high school football team, the Bears, hasn’t been winning for the past four years, and this year looks like it is going to be more of the same. But then a mysterious coach named Aggie appears and gives Coach Grimes the Playbook of Champions. Coach Grimes has nothing left to lose; he reads the Playbook and teaches his team the lessons found within: courage, perseverance, attitude, confidence, and integrity. Suddenly, the Bears are winning. Scott Wimberly’s story of teamwork and small-town football will have you standing on the sidelines in excitement. The lessons from the Playbook of Champions can be used in every aspect of your life as well, from sports to family to spreading God’s love.

Click here to order your copy of Playbook of Champions at:

If you grew up in Alabama or in the south this is a book that you must read.  It captures your heart as you read it and will bring back many fond memories of high school football in a state where football is the single most important thing in every town, no matter what the size,  large or small. As you are reading this book, you will feel as though you are there in person.

“The Playbook of Champions is a must read for all coaches and student-athletes.  The broad scope of athletic concepts is covered extremely well.”

Having known Scott since his undergraduate athletic training days, it’s only natural that; “Playbook of Champions” came to be.  Always a team player, he persevered under extreme pressure, the death of a player.  With his good work ethic and positive attitude, he willingly accepted his responsibilities daily.

I wish to recommend Scott Wimberly’s latest book called “Playbook of Champions.”  The book is well written and easy to read.  It moves at a pace that can be visualized and identified with, if you have ever been a part of a high school or college football team.  The message is beneficial to all people involved in any type of group endeavor.  The character traits and group dynamics  spelled out in the book are worthily of consideration for all  people and organizations.  It is a book that shows the value of positive leadership and the effect a leader with the proper intentions can have on a group of people.  No team or organization can raise above its leadership!  The willingness of the coaching staff to seek and practice championship traits is shown in how it can transform an average team into champions with habits and attitudes that will stay with them the rest of their lives.  The school and community benefits from the learned habits and practices of champions that are more than physical gifts that many athletics are born with.  Scott demonstrates the benefits of learning how to incorporate character building into a positive path to follow in life.  Scott Wimberly teaches that champions can be made with the proper leadership and practice.  I recommend the book to all people for enjoyable reading and as a practical guide in life!

I thoroughly enjoyed reading the playbook of champions. Having been associated with football at all levels for over 50 years, I can truly appreciate the content and the story included in this book.Fun reading for the athlete and the non-athlete.

The messages are presented in plain language for all to understand.

The University of Alabama

Scott WImberly has written one of the best books I have ever read.  It is a must read for anyone going into, or already in the field of coaching sports.  I highly recommend this book

Scott Wimberly continues to impress me with his literary talents.  This is a fantastic book, I highly recommend it to everyone.  I can’t wait for his next work to come out

This is a well written, fast-paced read.  A thoroughly  engrossing “can’t put it down” story. Scott Wimberly has captured the essence of the sport.

I enjoy the real nature of the game of football. I like how the book displays the importance of football preparing these young men for life’s challenges. It is a book that all sports fans can appreciate and “get into” while examining their own priorities in sports.

I thought the book was vey well written, it captured the essence and spirit of high school football. It was a great read for sports enthusiasts as well as the casual observer.

If you don't know your purpose in life and want to be mentally tough then to set up your process today with Scott Wimberly. Get daily updates here.